PayPal claim investigation decides in your favor. You collect $45.
Posted by Randy at 10:53 PM 3 comments:

The final mail-order typewriter has arrived, giving me a grand total of 54 machines. It is exactly one more than space allows, so it's sort of wedged in there.  It fits, more or less.

While I wait for resolution of my Etsy claim, I need to get back to work. I love typewriters, but they're a distraction from my writing. I write my stories on my laptop using a mini USB keyboard instead of the horrible keyboard that laptops always seem to have. I'd love to do it on a typewriter, but I get impatient, and I'd just have to retype everything into the computer again anyway.

So, I'll update things here when I find something out about the case, or when I can get some more pictures taken of the rest of my collection, but meanwhile I have a novel to work on. Or, several.

I have, in various stages of completion, two novels and about twenty short stories. None of them exceedingly far along...but if I devoted some time to them, I'd have something.

Point is, I have had the time but have not used it properly.

So I'll update when I find out something. Otherwise I need to finish one of these two novels, then the other one, in the next 90 days or so.

I will focus on that for a spell and get back to you.
Posted by Randy at 6:29 PM 6 comments:

The Case of the Truant Typewriter - Update

Have officially opened a case with PayPal. I got in touch with another person who bought a typewriter from the same seller and was similarly stiffed. She advised me to file a claim. I have until the 7th to do this, but I want to make sure the seller doesn't respond in the next few days. It won't really make a difference at this point, though. It's probably best just to try and get my money back if I can. Either way, be it fraud or the seller is just dead, I don't expect to actually get a refund. It's worth a shot.
Posted by Randy at 2:18 PM 2 comments:

The last auction and mail-order typewriters have arrived. I got a Smith-Corona with its own issues today. I'll discuss that one later. Still out is one that I'm pretty sure I will never see. I bought this on May 23rd from an Etsy seller whose name I have obscured. 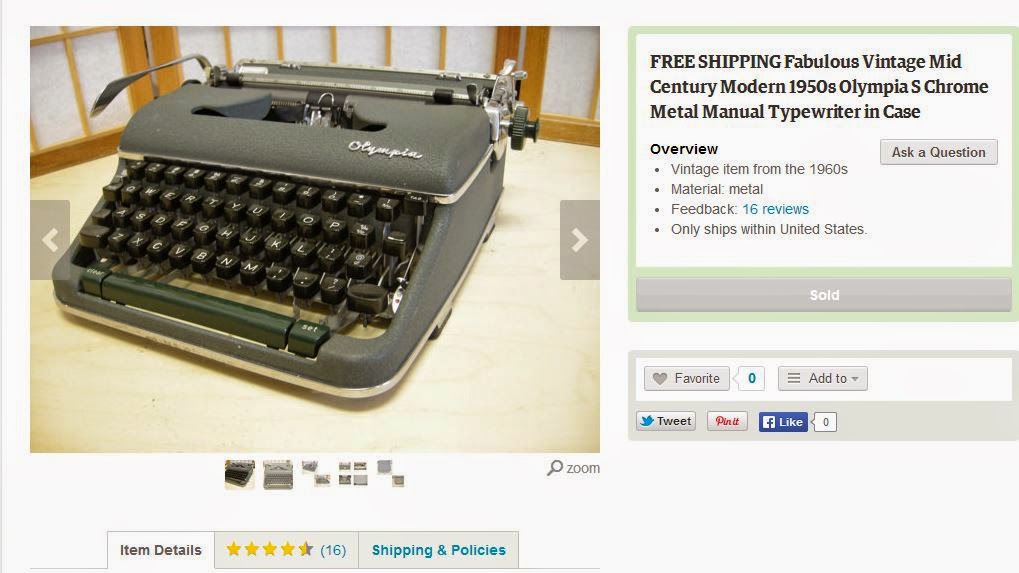 It did seem like a great deal - $45, free shipping - even though there was no case promised or shown. I do have a good case from another hopeless Olympia that I believe will fit. Even if it doesn't, it's a good price.

It wasn't long before I noticed the item hadn't been shipped. Then I saw this message on the seller's Etsy profle. 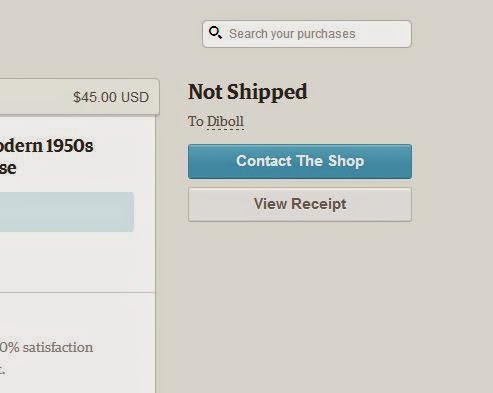 An attempt to contact the seller got a copy of the same message sent to me. No other contact from the seller or their friends.

The seller also stiffed another buyer, who left a less-than-kind review.

I don't know if complaining will do any good, or contacting Etsy, or PayPal, or whoever. I have no clue if the seller is even alive, or if this is some sort of scam. I do know many people who have died of cancer, and I take it seriously. In the end it's only money, and I understand that. I would feel like a huge scumbag if I gave someone a hard time and this was all on the up-and-up. They have many great reviews and a good transaction history. But I do know the item hasn't shipped, and I have no indication it ever will. I will hesitate to leave a nasty review or e-mail, because that's not going to help. All I can do is play wait and see. I hate playing wait and see. It kinda sucks.

UPDATE: After another attempt to make contact went unanswered I had a PayPal investigation opened. If not resolved by July 7, I can file a claim. I don't even care if I get the typewriter now, just want my money back. A little snooping on the seller's profile revealed that this same typewriter was sold to someone on May 6, two weeks before I bought it. Suspicious.
Posted by Randy at 2:59 AM 4 comments:

The East Texas Broken Typewriter is now closed to new applicants. That's not to say that I won't stumble across something in a thrift store and purchase it, or that Olympia that I bought on Etsy will ever come in (it won't), but the shelves are full...over full, in fact, and I don't have the room or time to take any more machines in. I do still have to take more pictures to detail the rest of the collection, and will do that in the next several days, but that's as far as that goes. I have some interesting experiences to relate with various Royal typewriters that I'm dying to put down...I just don't have the time at the moment.

I have some bids out, and am waiting for a few machines to arrive, but I think I'm done with mail order. Ebay and Etsy provide both bargains and horror stories, but frankly I'm out of patience with the both of them. Also out of space as far as storage goes. I was up most of the night with a similar Royal Sabre and an 890, trying to figure out how certain things should work and why they don't. Essentially, they're both parts machines. I am waiting on another Royal Sabre that hopefully they'll provide parts for...but who knows. I may just have three parts machines a few days from now. I like the idea of being able to fix something, and in fact just fixed an old Montgomery-Ward Escort a few days ago, but it's not that easy. I am utterly and completely out of space, and that also includes work space where I can take these things apart if necessary.

I don't know. I've been neglecting my responsibilities lately. I am behind schedule on my writing and should be doing that. Just very, very tired. Will be taking some photos of a few more typewriters in the coming days and posting them. Just be aware that there are now two hybrid Frankenwriters now, one a Sabre/890 and one an 890/Sabre. They changed the body material from metal to plastic between 1966 and 1972. You know that? It's weird.
Posted by Randy at 11:37 AM 2 comments:

Round 3, in which I show and tell about typewriters #13-18 in my seemingly endless collection. Things are looking up as I mostly present machines I'm not completely ashamed to own.

This poorly-lit beauty is a Royal Heritage, circa 1958. These were apparently exclusive at the time to Montgomery-Ward stores. This one was $15, I believe, and extremely filthy at the time I got it...but it cleaned up nicely and it works well. No major flaws with this one. Push the Royal emblem on the front and the ribbon cover pops right up. When I purchased it, it still had a very old square Roytype ribbon in it, completely dried out. 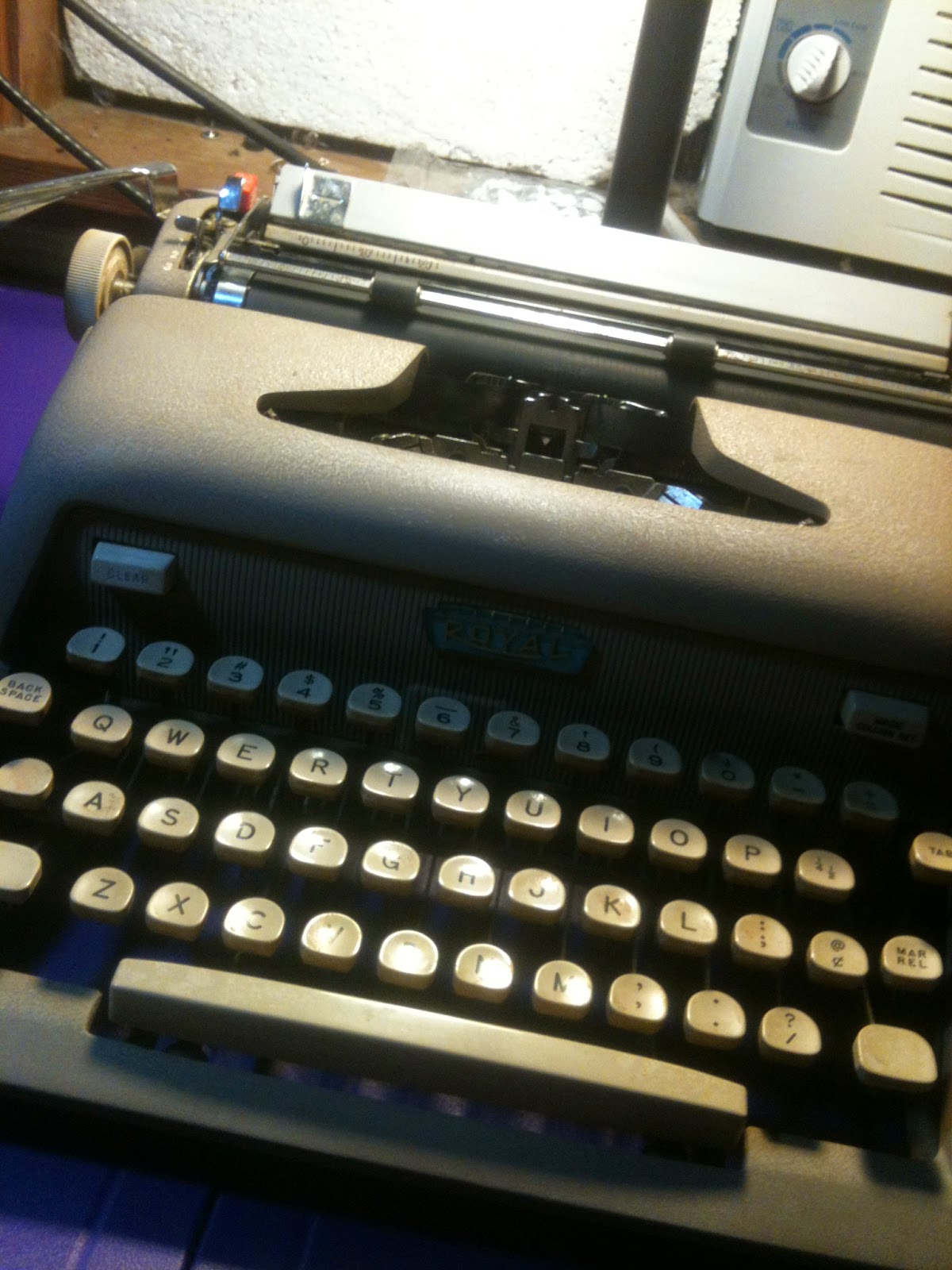 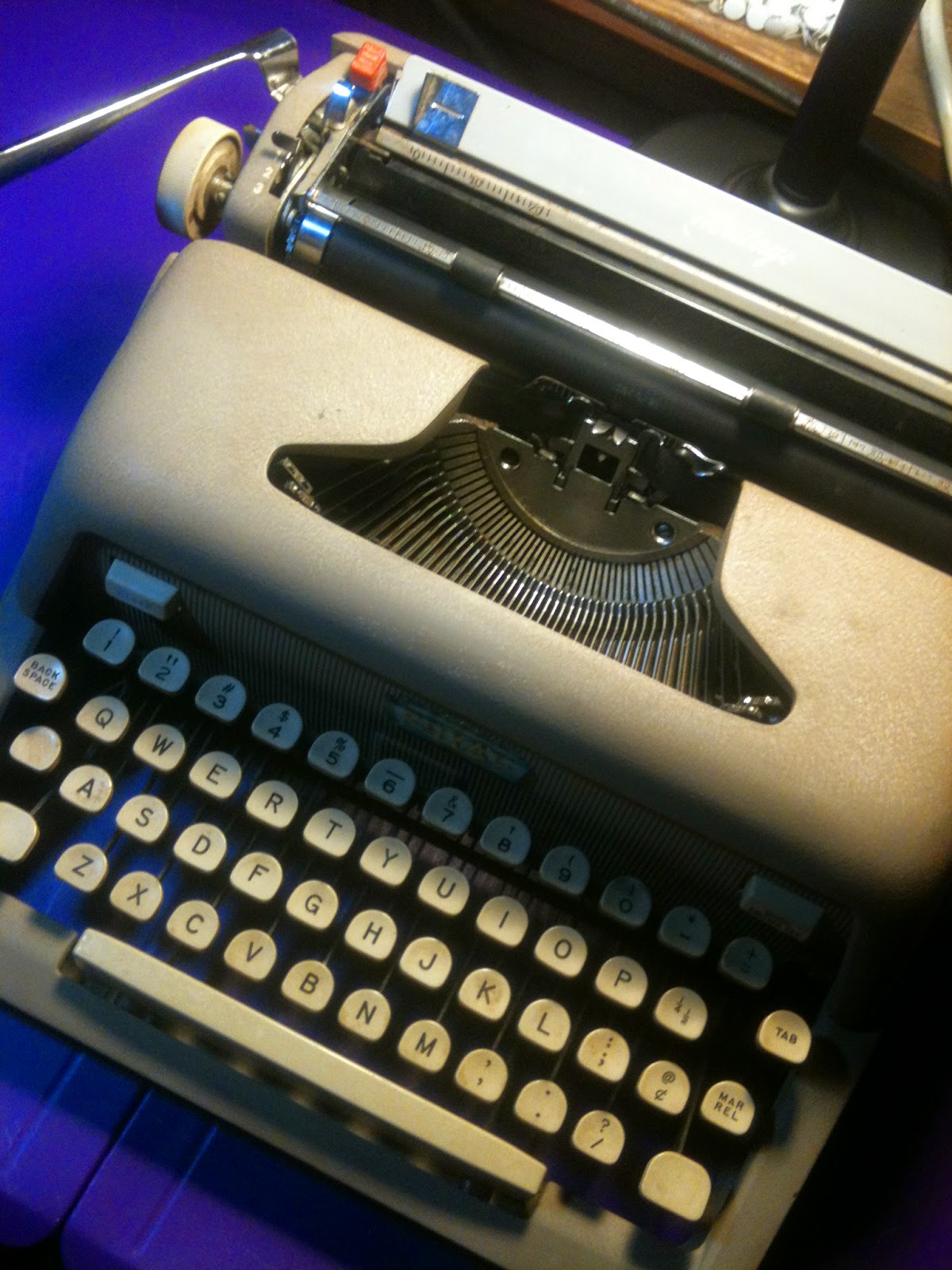 I've been a computer guy for a long time, since the mid-'90s, but there was a time when I wouldn't touch one. In fact, I sought out and purchased a manual typewriter in 1988 for $80 from a used office supply store. It was identical to this one, the (Brother) Montgomery Ward Signature 510. This one has a standard typeface, but the one I formerly owned had a weird capital italic font. My old one is pretty beaten up, missing the case and ribbon cover, but is now the property of my mother and living in her storage room. It does still work though, because I put a ribbon on it last year and tested it out. I felt nostalgic about buying this, but it's not that great compared to everything else I own. Works fine, for a Japanese typewriter made in the 1960s. 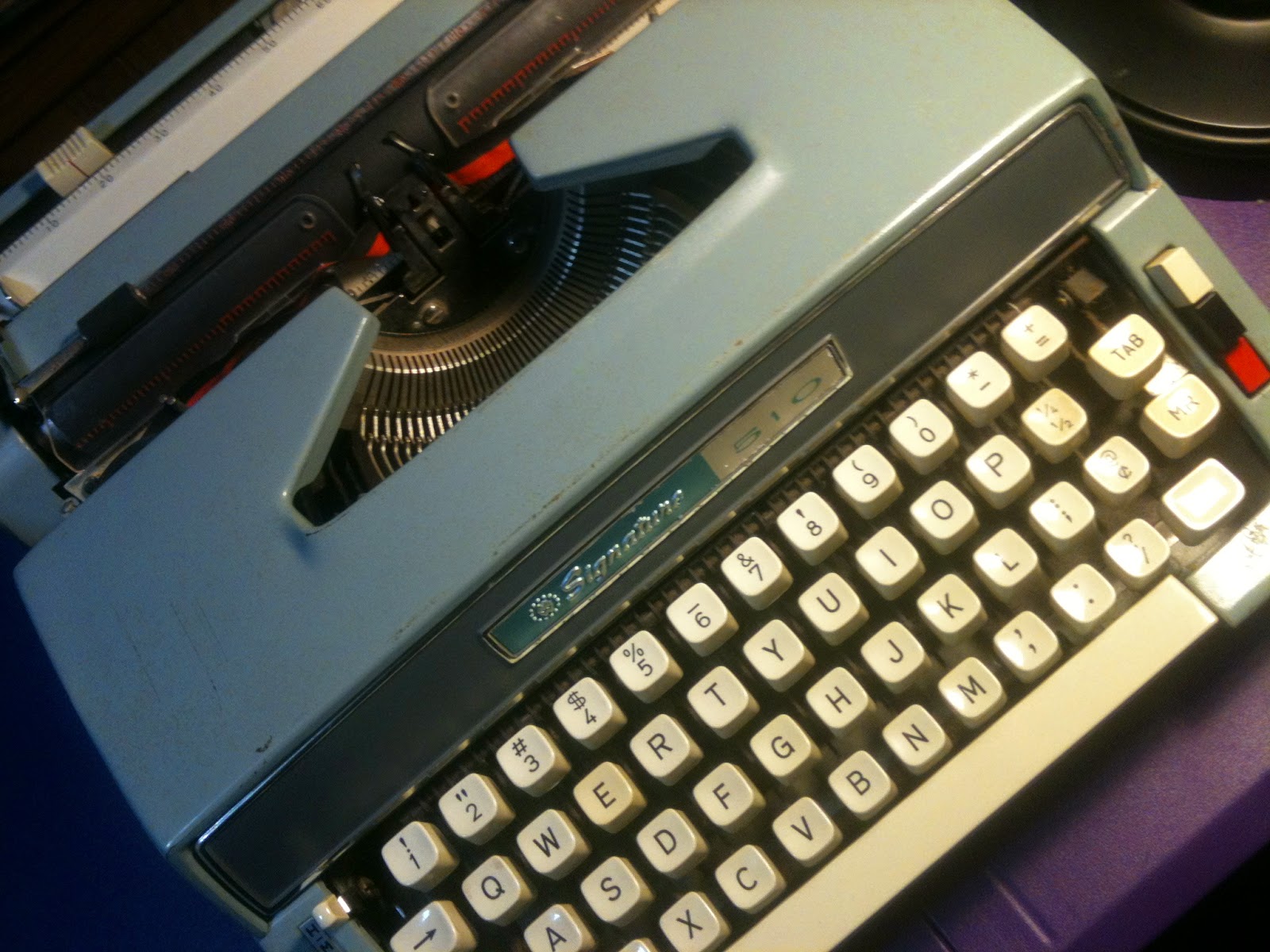 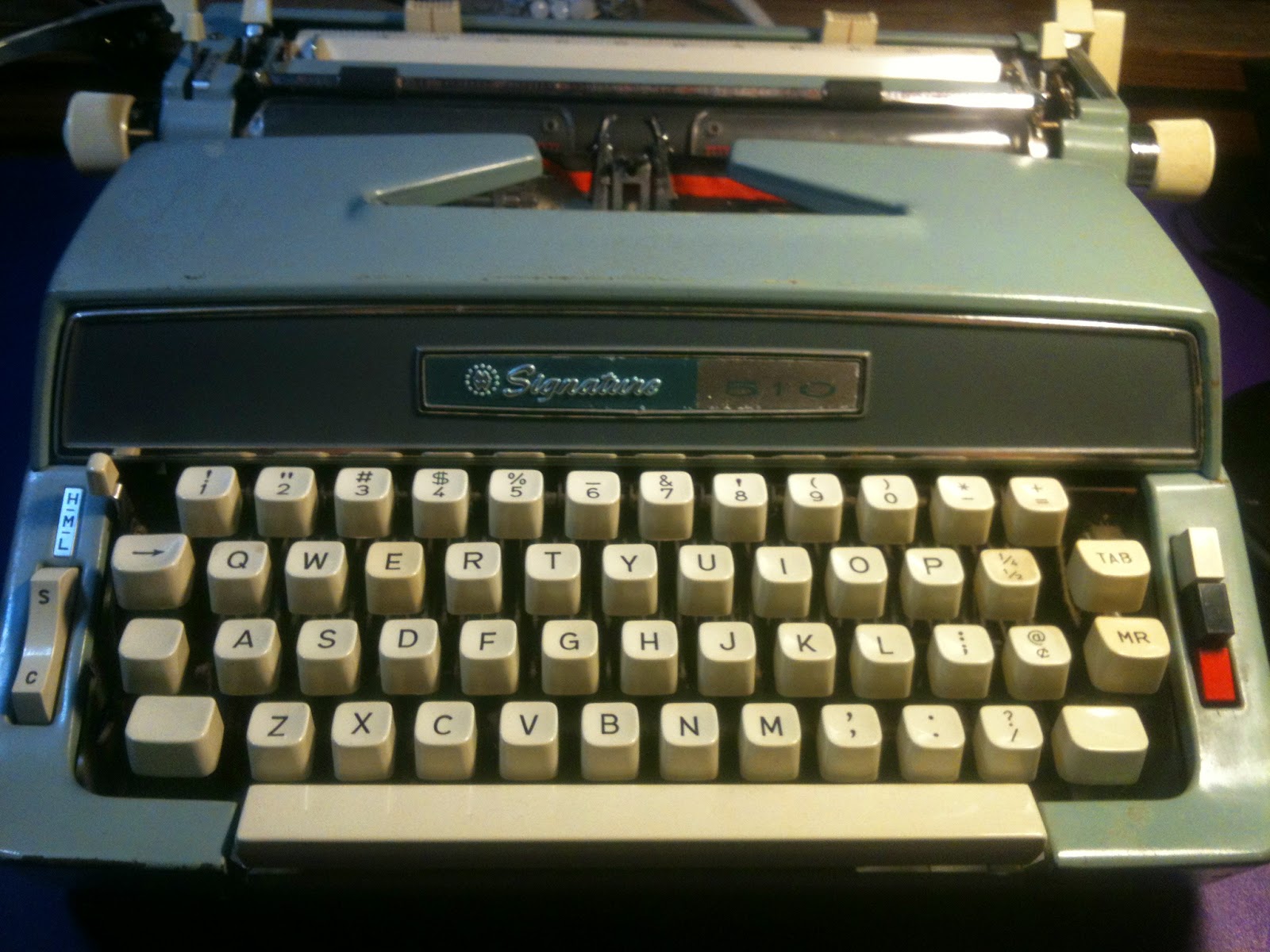 I was typewriter-less for over 15 years, until 2010, when I literally stumbled over this for $10 at a thrift store in East Texas. It's a Sears Citation 12, made by Smith-Corona. It's a deep green with a fake woodgrain insert above the keys. Classy. Nice and heavy, with a slightly extended carriage that looks to be able to take larger paper. Works really well still. No major problems with it that I can detect. 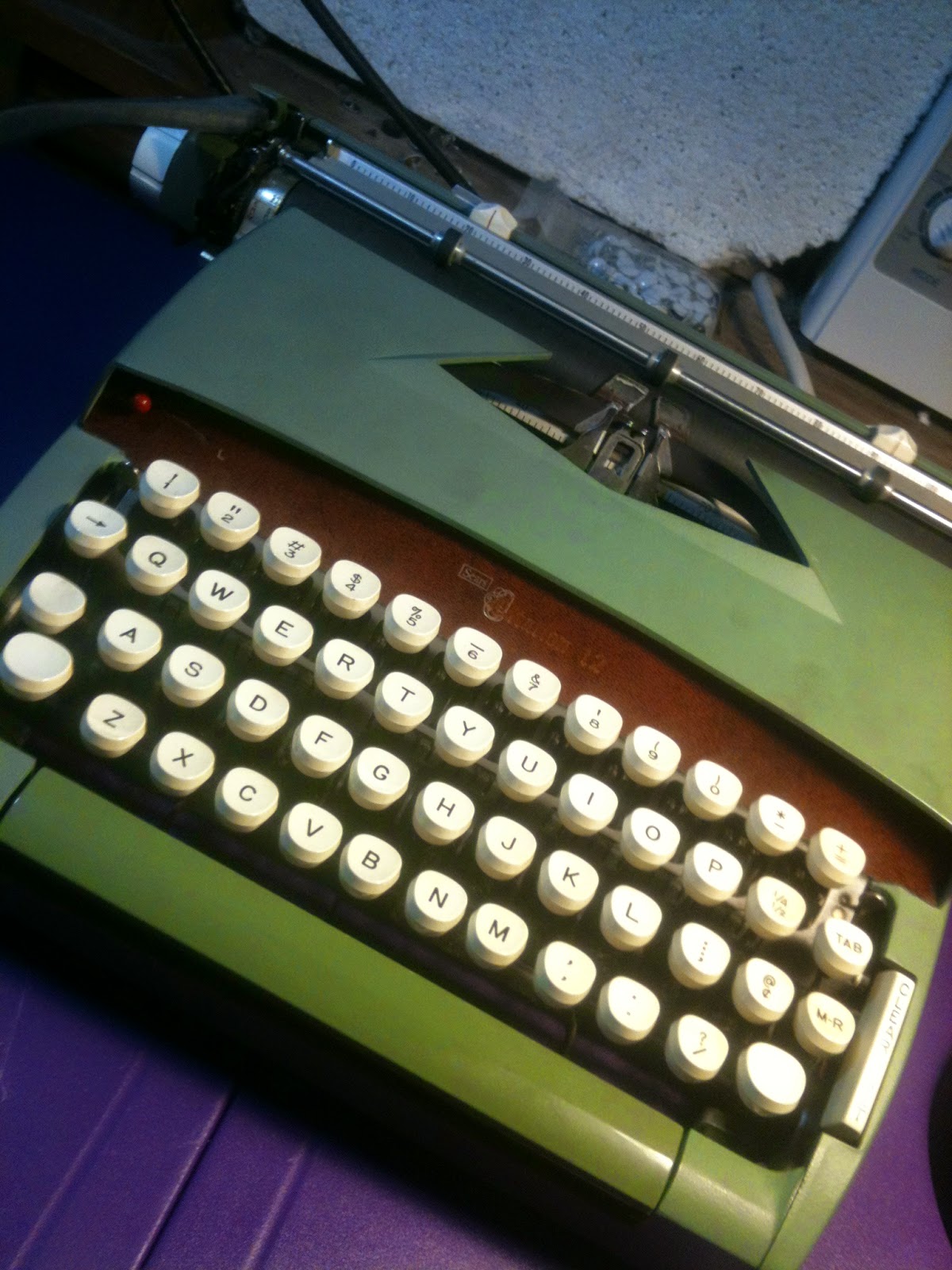 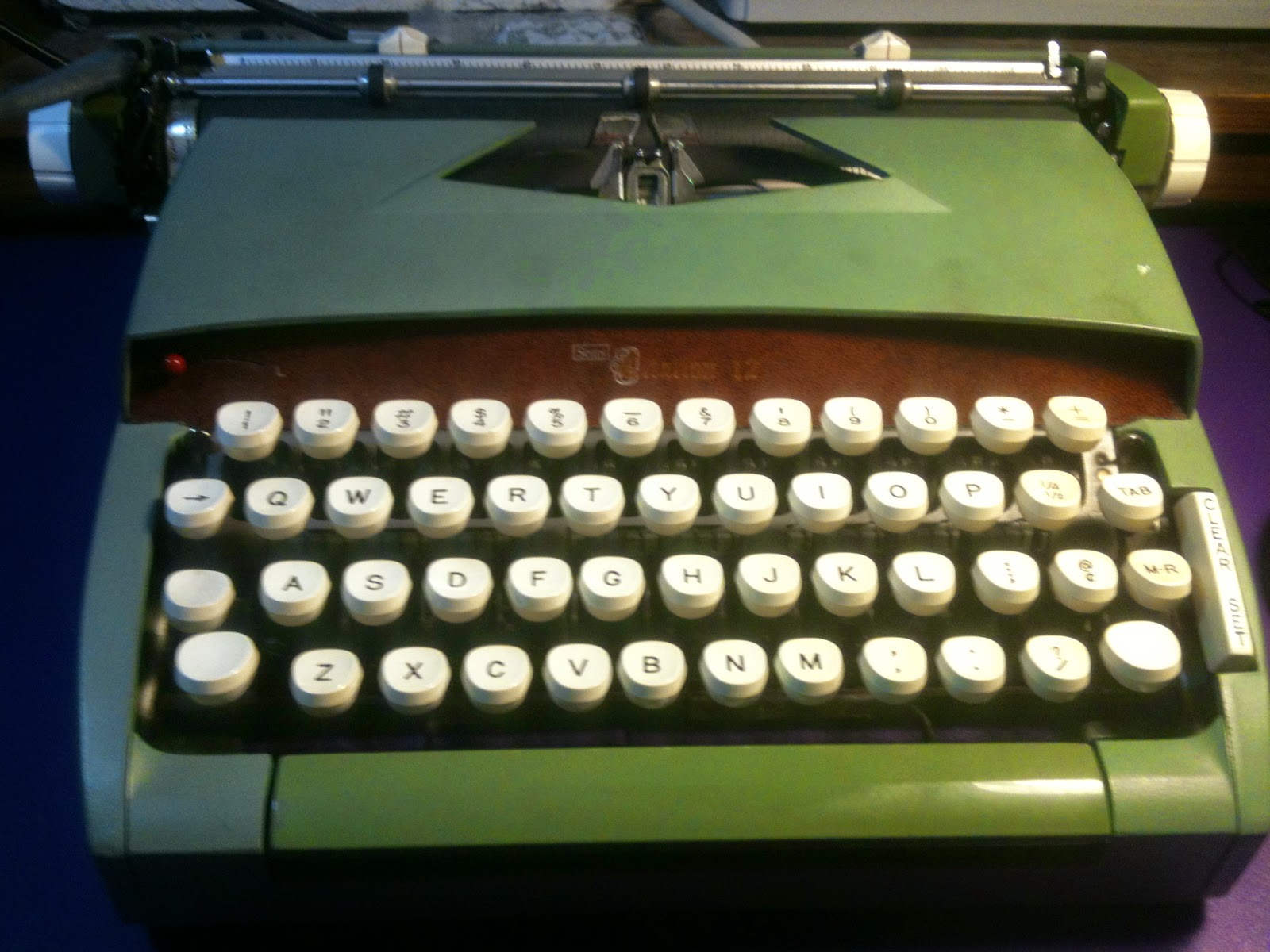 I love these later Underwoods, but they're getting harder to find. They seemed to have come in a variety of colors, but I've mostly seen blue and white for sale. This one is just beautiful, a nice clean Jewell. It types like a dream, but it stops like a nightmare at the end of the line...sadly, the bell is broken. But a broken bell is not the worst thing to happen to a typewriter, and I know it can ultimately be fixed. It's been known to happen, even if I don't currently have the skills to pull it off. 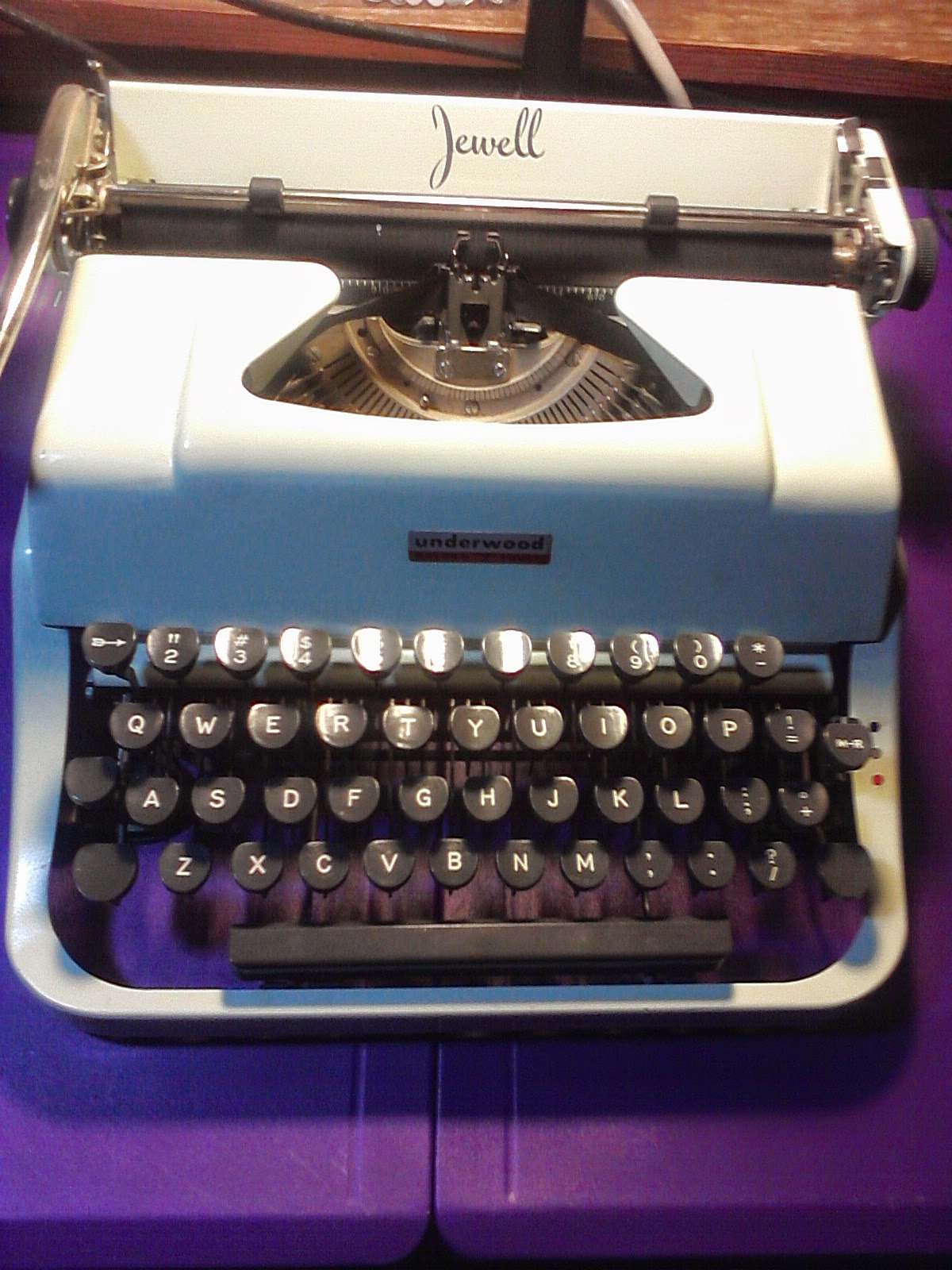 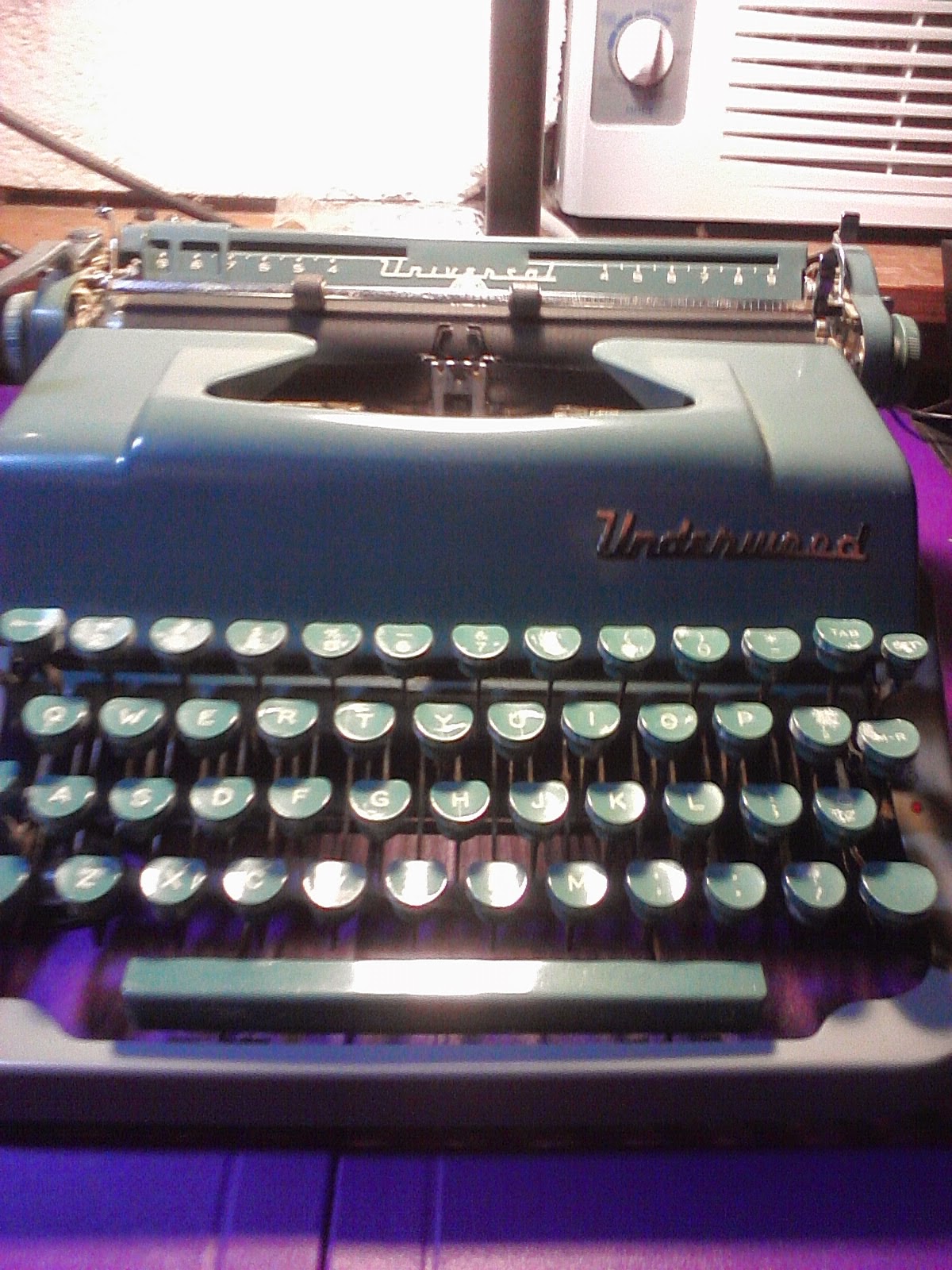 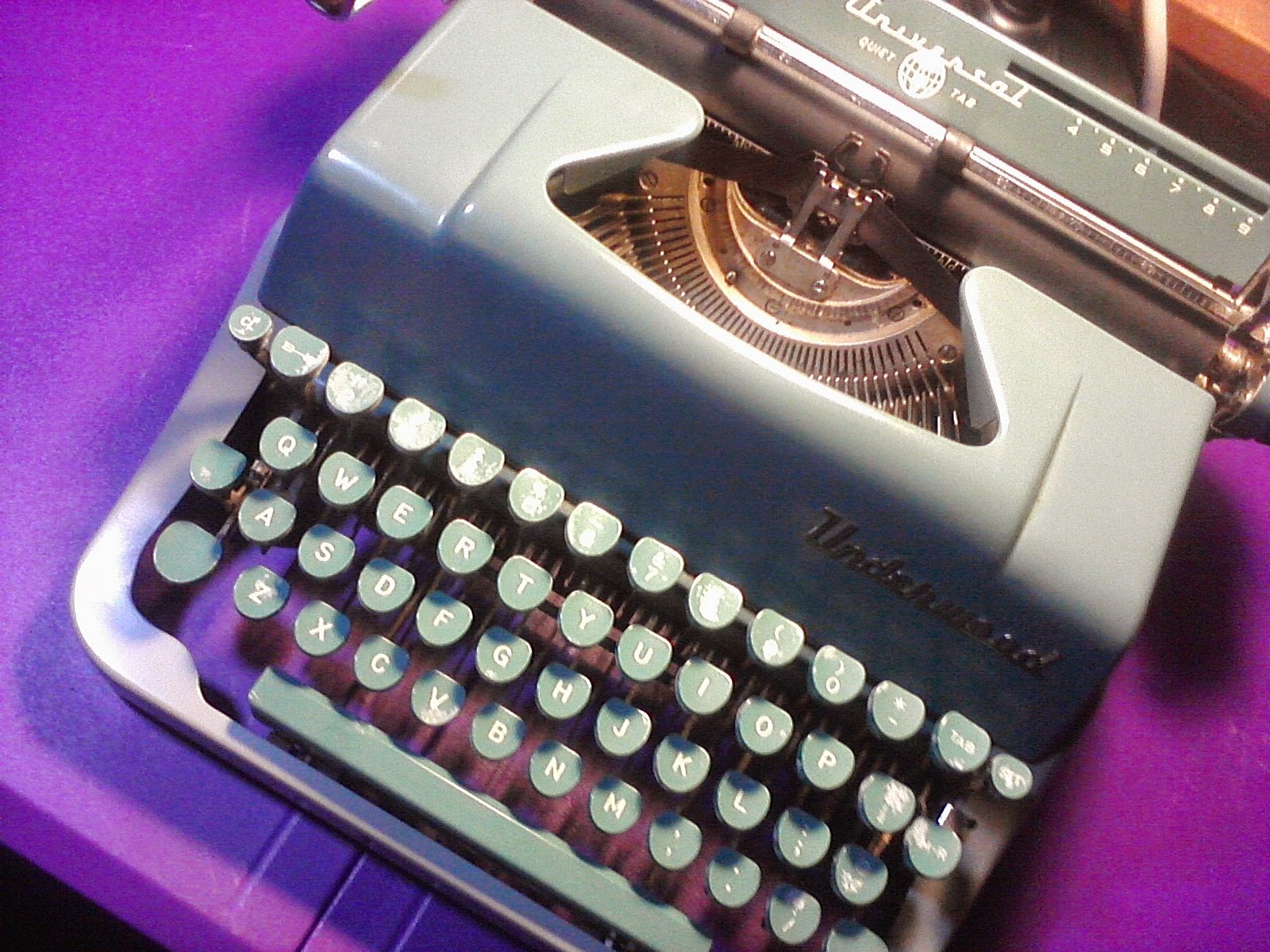 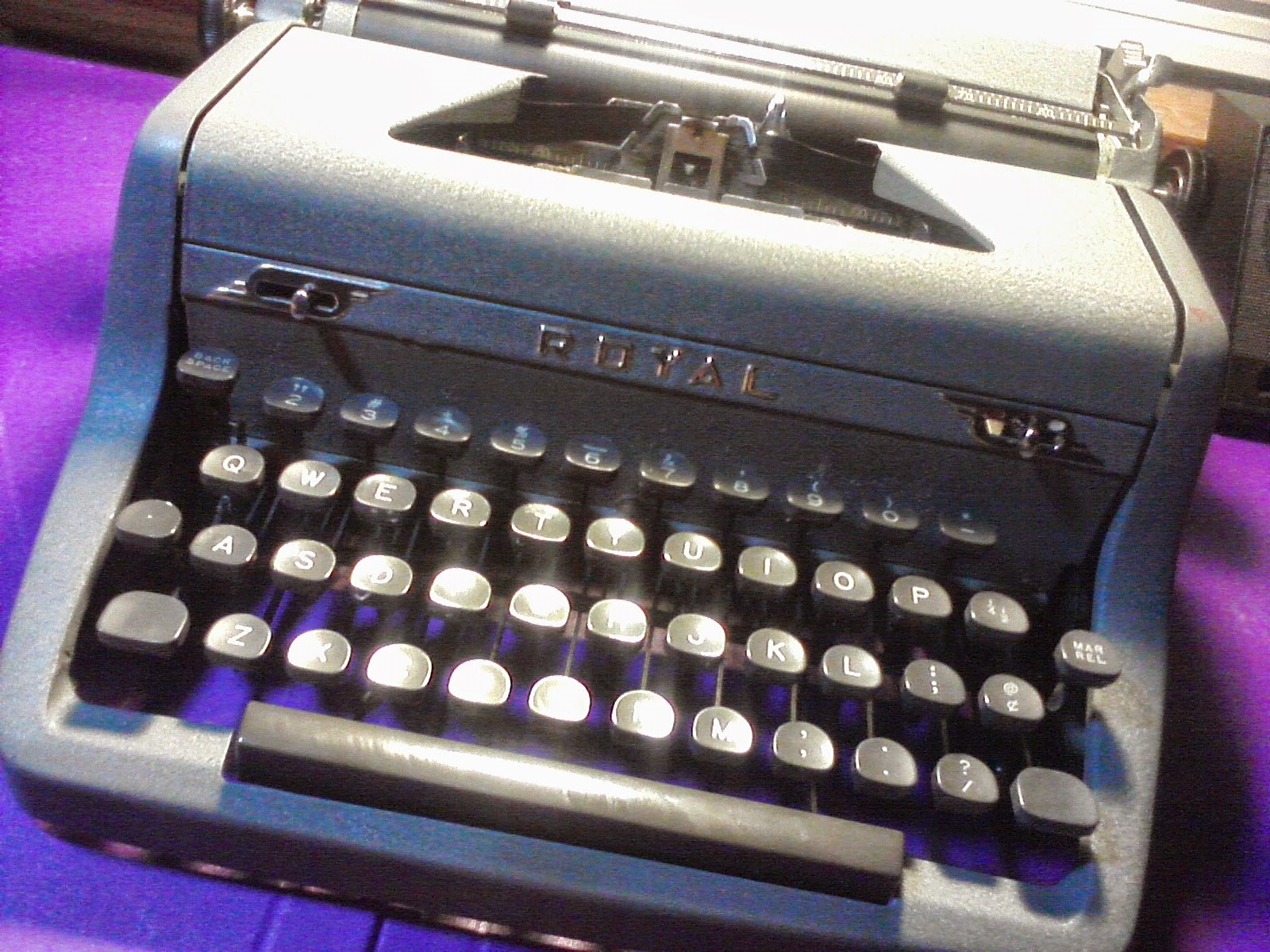 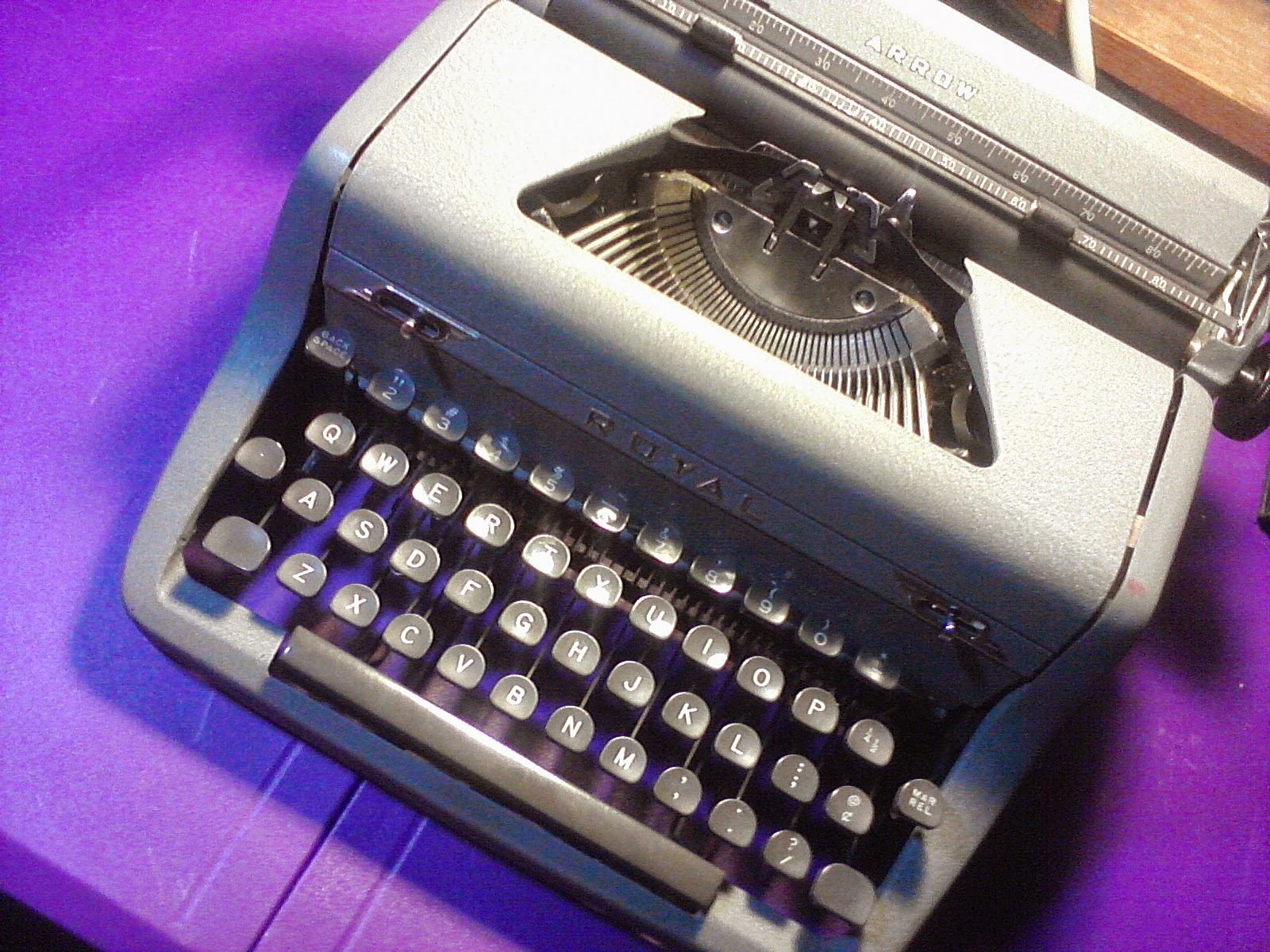 That's #13-18. Believe it or not, this is about a third of my collection. As I say, I do have a problem. In a day or two I'll post up some more. In my spare time, in addition to hocking my poorly-selling stories on Amazon, I also collect sleazy 1960s/'70s  private eye/spy novels and other series fiction paperbacks. If anything is more obscure and weird than typewriters, that's probably it. 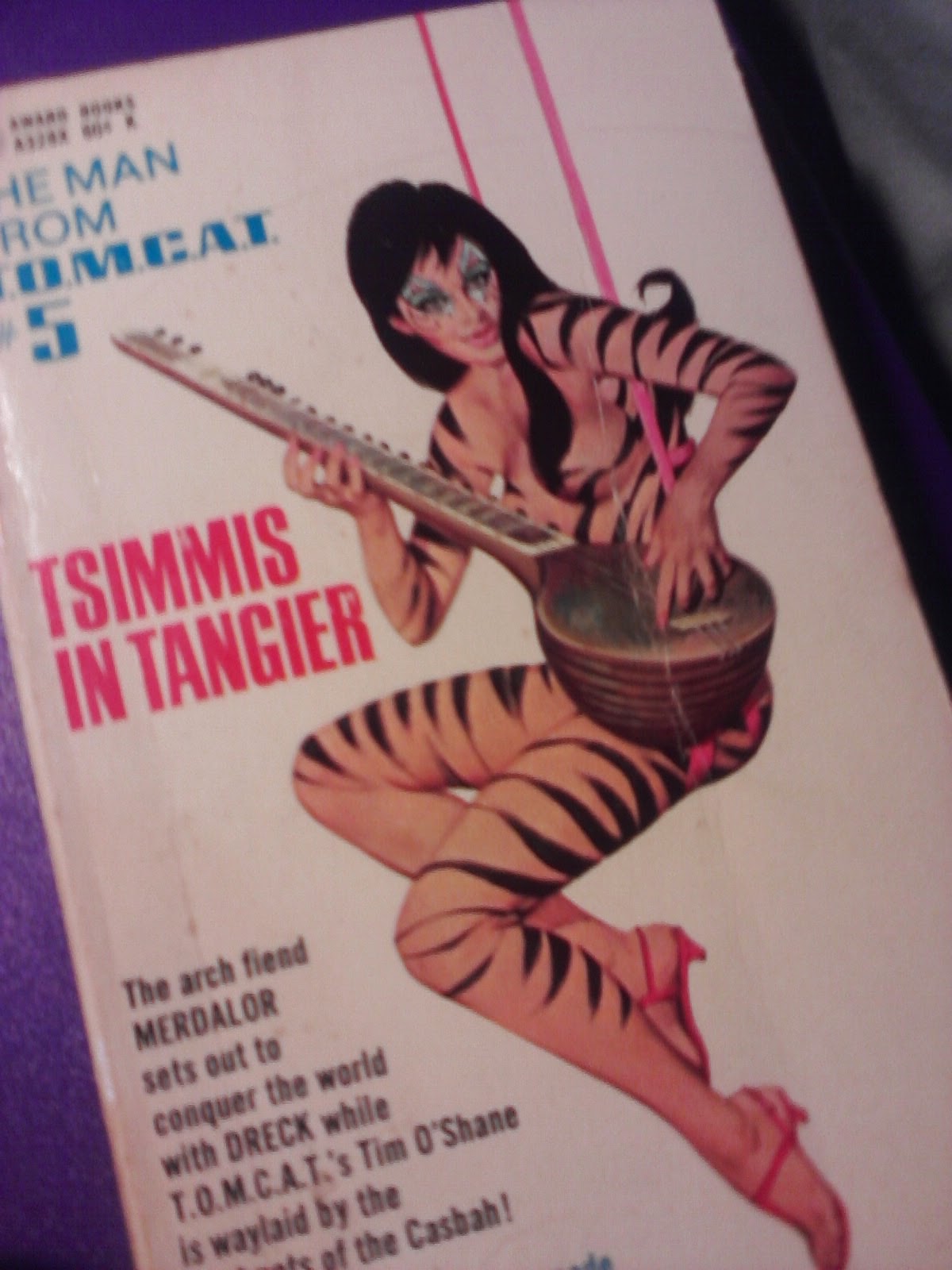 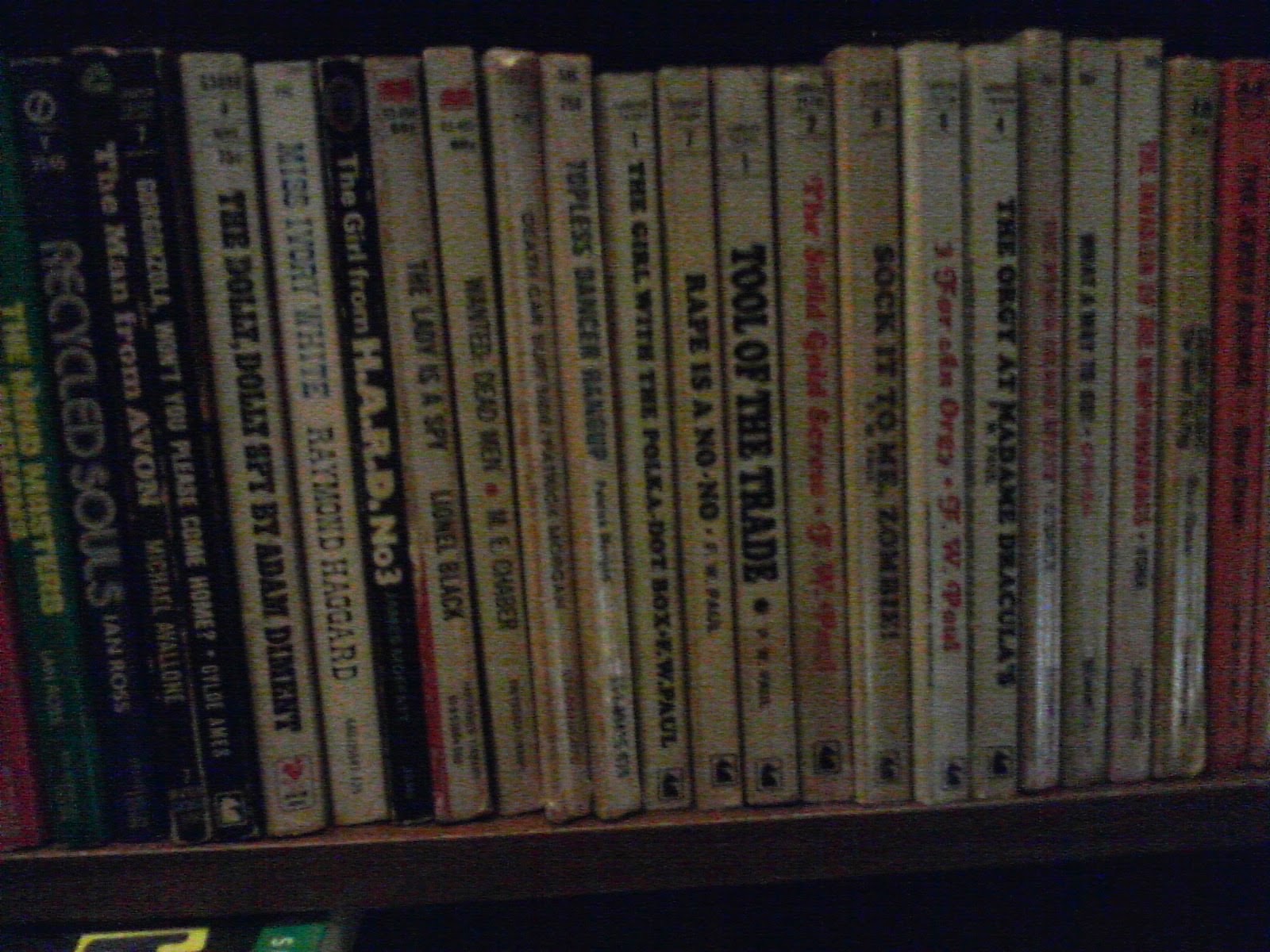 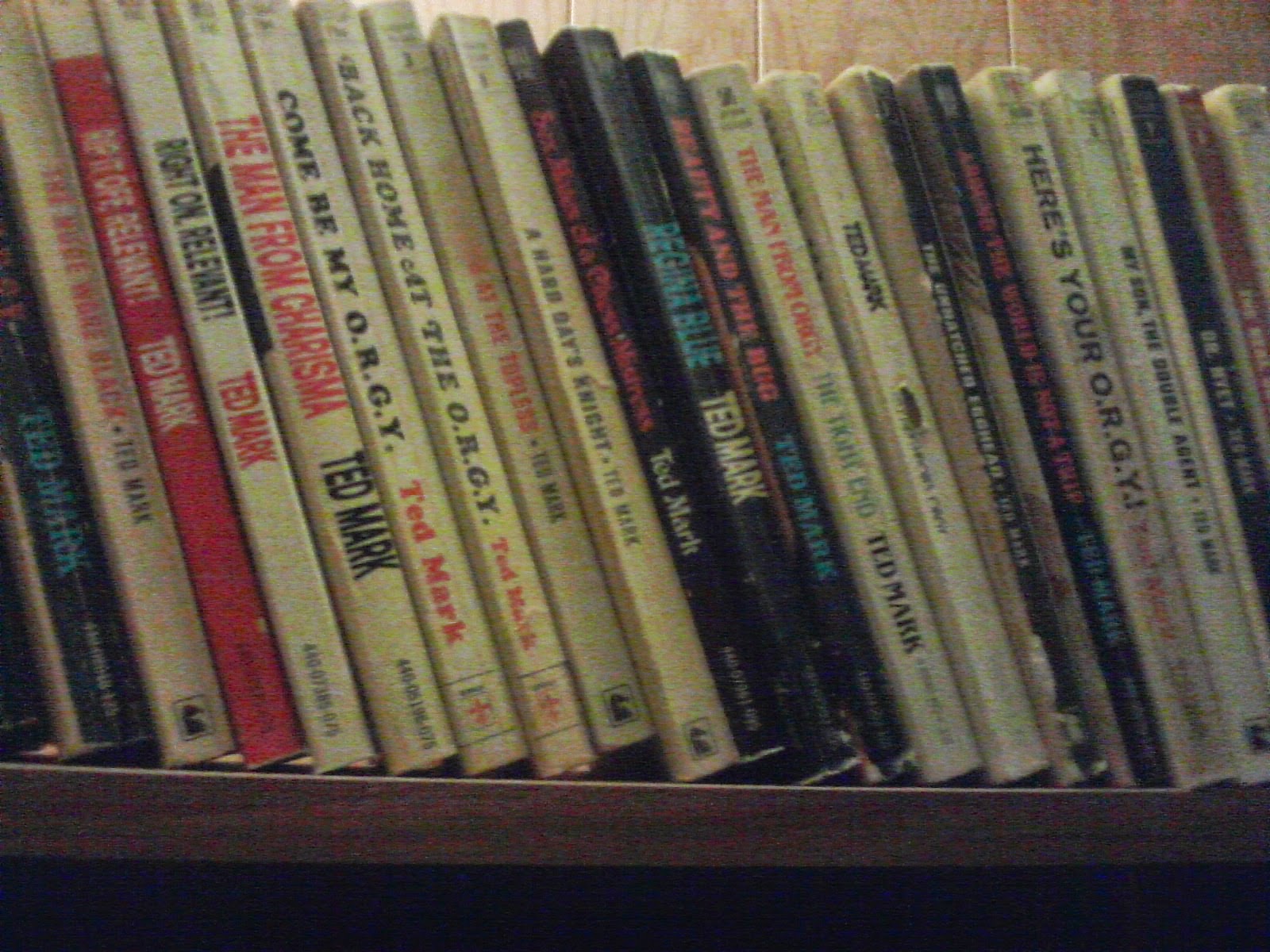